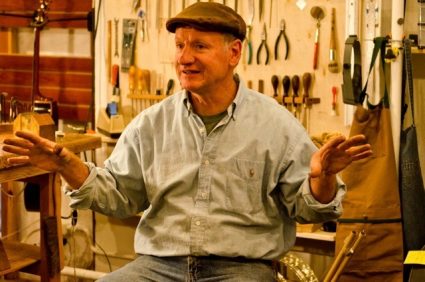 Edward Victor Dick has been a professional luthier since 1975. To date he has been responsible for over 40,000 string instrument repairs. He has also built over 450 instruments, many of them custom. Check them out here. He is well versed in all aspects of repair and is particularly skilled in neck resets, refrets, and restoration work. He is the inventor of the banjola and the director of The Colorado School of Lutherie.

Tom Hunter-Crump began his career as a Civil Engineer but has been drawn to woodworking since college days in Springfield Missouri when he worked in a furniture building business. In 1998 he developed his own furniture business, Natural Edge Furniture, and eventually partnered with Dave Gesler to create a joint furniture business, C&G Woodworks. Tom and Dave specialized in Arts and Crafts furniture, from the American Mission style to styles with Japanese and European influences. Tom changed his career path to luthiery in 2006 as a member of one of Edward Dick’s guitar building classes. In January 2010 he began an apprenticeship with Edward in his repair shop. He continues to enjoy the repair side of luthiery, and also builds tenor guitars, guitars and ukuleles. In his free time he enjoys running, biking, playing bluegrass music with his band Briar Branch, and spending time with his wife of 22 years and their three children.

“Tom’s background as an engineer and as a self-employed furniture maker provides him with an excellent foundation in problem solving. He has a very creative way of approaching instrument repair and I consider him to be an excellent craftsman.” -evd

Heath Rothgeb grew up in a small town in Ohio.Gallipolis is a nice and quiet town in Southeast Ohio located on the Ohio river. They take sports very seriously and he grew up playing baseball and football, playing both all through High School lettering in football 3 years and in baseball all 4 years. His family spent their summers on huge 3 to 4 week camping trips traveling all over the United States, bringing a huge sense of adventure that lives to this day. He had a great upbringing with amazing parents and had a wonderful family that all lived in this same town that did everything together.

Along with sports and adventures, he grew up with great music. His Dad had a good record collection, awesome stereo and a wonderful knowledge of good music. His Mom is a musician that was always playing piano and music. She even organized plays and musicals for all the kids around town. He started playing guitar with his friends around 13 years old and music has always been a huge part of his life since.

Heath got a Business Marketing degree at Marshall University in West Virginia. He had a wonderful time in college with awesome people and music was huge, it was everywhere all the time. This passion continued to grow and get bigger and better.

After graduating from college, Heath moved to the Rocky Mountains to Keystone, Colorado to embark on a huge adventure and wound up with another passion; snowboarding. He even married his girlfriend and best friend of 8 years on top of a mountain at Keystone Resort in snowboard boots and snowboarded down the mountain after the “I Do.” Their huge sense of adventure together keeps developing which is easy to do in the mountains. They have camped, hiked, biked and snowboarded all over Colorado.

After Keystone, Heath moved down to Denver, working a few odds and ends until landing a short career making eyeglasses. This tactile work developed and acute attention to detail and was very hands-on which transferred over very well for him in his transition to guitar building and repair work.

Heath started his time at Victor Guitar in March, 2015 enrolling into the Internship program they offer. He built 3 instruments over the course of 3 months and was then a Repair Apprentice learning from owner, Edward Dick for the remainder of the year. Starting January 1, 2016, he became a part of the shop and enjoys doing repairs of all types to help local musicians. Along with doing repairs here, he also gets the opportunity to help and assist in teaching some of the courses offered here with Tom and Edward and loves being a part of the everyday energy at this beautiful shop. Heath enjoys creating and writing his own music and loves being here every day soaking up the opportunity to continue to learn under the Master Luthier, Edward Dick. This shop has changed his life and he is infinitely thankful to his family and friends and to everyone else who has helped him reach this stage of his life. 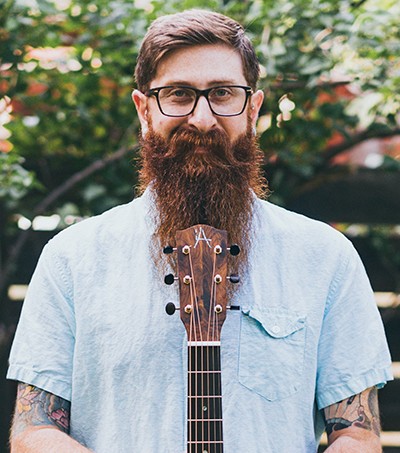 Michael Stewart is a Colorado native and has been on a unique and varying musical journey since the age of 5. Raised in the foothills of Golden, Colorado, Michael began playing the piano at age 5, transitioned to acoustic guitar at 14, and spent the majority of his twenties playing keyboards, synthesizers and guitar in various local bands. He studied music theory and psychology at the Community College of Denver and received a psychology degree from the University of Denver. He has a passion for music education and spent some time working as a music therapist for children with autism and currently sits on the board of a Denver non-profit, Youth On Record.

Continuing to search for the next piece in his musical puzzle, Michael began the 3-month internship with the Colorado School of Lutherie in the fall of 2016. Under the guidance of Edward and Tom, he quickly found a love lutherie and in 2017, formed his own company, All Four Guitars. Michael has begun working with both local and nationally touring musicians and All Four Guitars has a lot on the horizon for 2019 and beyond. Michael builds the majority of his instruments at Victor Guitar where he enjoys the daily opportunities for collaborative learning. He has assisted with the ukulele building course and continues to further his education as an apprentice in instrument repair with Edward.

Michael currently lives in Morrison, CO with his wife Jamie and dog Ruca. When not working on his craft, he enjoys travel, outdoor activities, going to concerts, and playing music with his dad. Victor Guitar and The Colorado School of Lutherie continue to be an integral part of All Four Guitars and Michael’s journey and he feels fortunate to have become part of the Victor Guitar family.